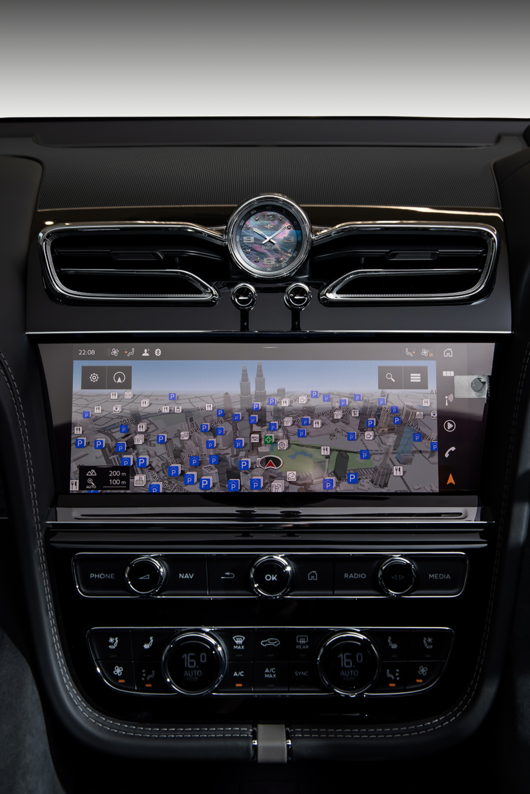 Efficiency is also an important aspect of such a powerful engine; to achieve effective cylinder deactivation with the complex layout of the W12, the engine control unit deactivates one complete bank of six cylinders as required. Switching between A and B Bank using information from the inlet and exhaust sensors, minimises cylinder and catalytic convertor cool down and avoids spikes in exhaust emissions. This not only benefits CO2 emissions but realises significant economy gains under part-throttle cruising conditions.

The new Bentayga Speed takes the Bentayga’s extraordinary abilities to new levels, utilising the 6.0-litre W12 twin-turbocharged engine that delivers peak power of 626 bhp (635 PS). Effortless acceleration is always guaranteed thanks to 900 Nm (664 lb.ft) of torque, available as a plateau from 1,500 rpm to 5,000 rpm. The assembly of the W12 powertrain takes the skilled engine builders approximately ten per cent of the total hours required for the manufacture of the Bentayga Speed.

With exceptional performance, comfort and handling, maximum speed is also increased to 306 km/h, while the 0-100 km/h sprint is delivered in 3.9 seconds.

The new Bentayga Speed has zipped its way into the Bentley Kuala Lumpur showroom, offering Malaysians the pinnacle of the Bentayga family with its effortless performance and uncompromised luxury. Hand-built at Crewe, the Bentayga Speed combines the W12 powertrain and many of the model’s luxurious features as standard, including the Mulliner Driving Specification.

Building on a long tradition of Speed models that was born with the Continental GT in 2007, the new Bentayga Speed maintains the performance credentials proved by its predecessor, which claimed the production SUV record at the gruelling Pikes Peak International Hill Climb in 2018.

The new Bentayga Speed builds on the completely refreshed design of the new Bentayga, adopting the same Bentley design DNA now prevalent across the entire model range.  Introducing the very latest onboard technology and an even more cosseting cabin, the new model is significantly revised both inside and out.

The Bentayga Speed’s optional carbon ceramic brakes are the largest and most powerful brakes available from Bentley, with a maximum braking torque of 6,000 Nm and engineered to withstand temperatures up to 1,000 °C. They also provide a weight saving of more than 20 kg over iron brakes.

In 5th to 8th gears, when the driver releases the throttle (at motorway cruising speed, for example) the car will open the torque converter, dropping the engine to idle and simply allowing the car to roll or ‘sail’. When the throttle is reapplied, or the car starts going downhill and detects an increase in speed, the transmission is re-engaged.

To use this power appropriately the Bentayga Speed is equipped with four on-road Drive Dynamics modes: Comfort at one extreme, Sport at the other and with Bentley mode – the balanced recommendation of Bentley’s chassis team in Crewe – alongside a Custom mode for customers who opt to create their own driving set-up.

Uniquely in the Speed, the Sport mode has been recalibrated to enhance response from the W12 engine and the eight-speed automatic transmission, together with the air suspension system and Bentley Dynamic Ride. The effect is a more dynamic and engaging drive.

A new contrast stitching design through the diamond quilting of the Mulliner Driving Specification (included as standard) is unique to Speed, with each of the stitch lines running through the quilting being split – one to match the leather, the other in the contrast colour. Discreet metal Speed badging to the front fascia and Speed illuminated treadplates complete the signature look.

Customers wishing to amplify the sporty look of their Bentayga Speed even further can select the Black Specification. This striking pack replaces all exterior chrome work, bright detailing and some elements of the body with gloss black or carbon fibre versions, for an impactful visual statement. The front bumper splitter and the side sills are recreated by hand in carbon fibre, while the rear bumper diffuser becomes gloss black. All exterior brightware (including the roof rails) is resplendent in gloss black, as are the 22” Bentayga Speed wheels and exhaust finishers. Finally, the standard roof spoiler is replaced with a curved carbon fibre version.

“The new Bentayga has already raised the benchmark for luxury SUVs, against which all others are measured. It’s important that we still recognise the customer desire for absolute performance. The new Bentayga Speed remains the fastest SUV in the world, but more than that, it’s also the most luxurious version of the new Bentayga – the best of both worlds, the pinnacle.”

Inside, the Bentayga Speed introduces a dramatic design theme that balances luxury and performance in an unrivalled way. The unique Speed colour split is achieved through the use of dark colours enhanced by primary hide accents running throughout the seats and interior trim. Elegantly crafted ‘swooshes’ of contrast leather swipe around the doors, along the edges of the seat cushions and backrest bolsters, and on the lower console.

The Speed colour split also introduces Alcantara® to the cabin of the Bentayga, across the seat cushions and back rest centre panels, gear lever, steering wheel, lower knee trim areas, upper pillar trim and headliner. Customers can choose the Leather Specification to instead have these areas trimmed in hide.

‘Speed’ seat embroidery on the backrest of all the seats is included as standard, and as a no-cost option, customers can choose to replace the ‘Speed’ embroidery with that of the Bentley logo.

Seventeen standard paint colours are supplemented by a further 47 hues in the Extended and Mulliner ranges, with an additional 24 duo-tone options. Customers wanting to go beyond this total of 88 options can have paintwork colour matched to any sample they provide. This exceptional range is complemented by a palette of 15 hide colours, six colour splits and eight veneers and two technical finishes. 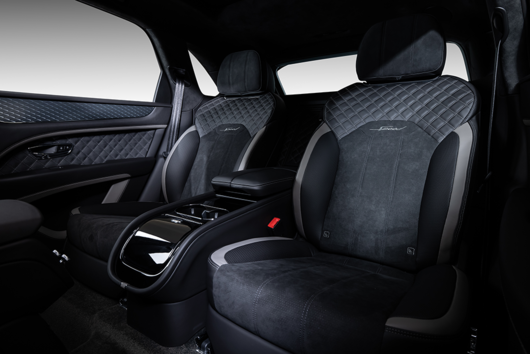 Setting new standards in the sector for customer technology interfaces, the new Bentayga introduces a new, cutting-edge infotainment system. A bigger and brighter, high-resolution 10.9-inch touchscreen, with an anti-reflection and anti-glare coating and much improved touch functionality, now spans the entire width of the centre fascia for a more contemporary look.

Content can be selected either via hard keys beneath the screen, or from the main menu screen. A customisable dashboard can also be set up to show three favourites, such as phone, navigation or media.

The advanced navigation system features free-text, context-specific search entry, including an address or point of interest. Navigation is improved with a three-dimensional building display, satellite maps, content in the driver’s next generation Head-Up Display and several other useful features. The Head-Up Display can now project traffic information, street names and distance to destination too.

As well as the usual array of media sources, wireless Apple CarPlay is now standard (in addition to the previous standard wired system), along with Android Auto. With a corresponding phone plugged into one of the car’s USB-C sockets, the central infotainment screen mirrors the smartphone display.

The new Bentayga Speed now has a fully digital driver’s information panel similar to the Continental GT and new Flying Spur. The display brings a contemporary look to the cockpit, can be customised to the driver’s requirements and features real-time lighting effects with elegant animations.

The high-resolution screen can be viewed in either Classic or Expanded format. In Classic, the display shows the traditional two-dial design of speedometer and tachometer. In Expanded, the right dial is replaced with an area for maps and media information.

The Pinnacle of Luxury and Performance

The multi-award-winning Bentayga set the luxury SUV benchmark when it was launched in 2015, offering customers the ultimate Grand Touring experience unrestricted by landscape or conditions. The Bentayga Speed is the most powerful and performance orientated Bentayga to date, defining its position as the pinnacle of the range.

The Bentayga Speed is now available starting from RM 1,062,000 before duties, taxes and registration. For more information on this model, please call +60 3 2165 1688, or follow Bentley Kuala Lumpur on Instagram, Facebook and Telegram: @bentleykualalumpur 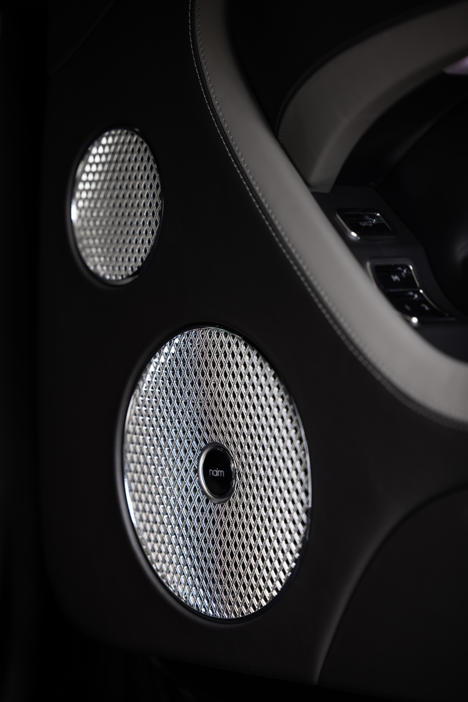 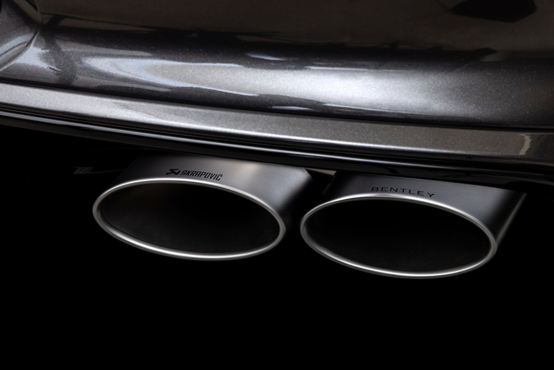 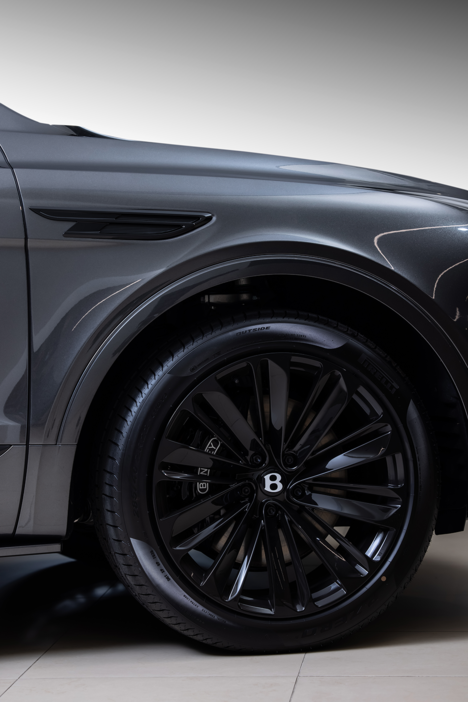