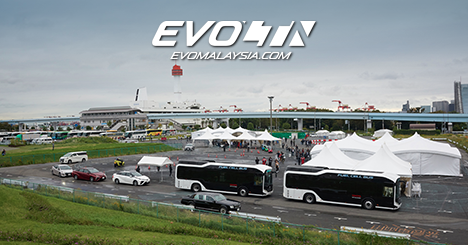 The first line of this article notwithstanding, I’ll admit I am a huge fan of Motorshows. I mean think about it, besides a shipping port-of-call, where else on earth can you witness such a myriad of different automobiles, from so many different carmakers (and bike makers too for that matter), from all over the world, all under one roof, all in a day? And of all of them, the Tokyo Motorshow (TMS) in Japan remains my favourite till this day. And here was the car we’d been dying to see!

LET’S face it folks, Motorshows are all the same. If you’ve been to one, you’ve been to all; really, the only difference being its location. To that end, venues like Paris, Geneva, Frankfurt, Shanghai/Beijing, Thailand, and of course Japan, annually host their own shows, in varying degrees of success, insofar as crowd attendance, as well as manufacturer participation is concerned. One thing’s for sure though, they’re ALL incredibly well received by both motoring enthusiasts, and the general public alike.

I first visited TMS before the turn of the new millennium, and since then it’s become a bi-yearly ‘pilgrimage’ of sorts for yours truly. Bi-yearly because the annual TMS alternates between passenger cars and commercial vehicles from one year to the next. It’s hard to explain why this show is so captivating to me, maybe it’s because it was one of the first international Motorshows I’d ever attended, and after more than 20yrs, this show can still surprise me! 2019 was the biggest surprise of all, because our hosts, the mighty Toyota Motor Corp., shocked the world… no, really.

What happens when a Motorshow has no cars? Is it still a Motorshow? For Toyota, yes. In a bold attempt to personify the President’s message above, their pavilion at TMS 2019 was completely void of cars. Wait, what? I hear you ask. Yes it’s true, in a sense. You see, Toyota are forging ahead by going back. Back to their roots…

Times, they are a changing…

"Bringing the joy and freedom of movement to all people. This is Toyota's vision for the future mobility society. We will provide many services related to movement to people around the world as we transform Toyota into a mobility company. We will continue to create mobility that will be cherished, looking forward to the future.” – Akio Toyoda, President, Toyota Motor Corp.

A very long time ago, in a Japan we wouldn’t recognise today, founding-father Kiichiro Toyoda had a dream, a vision “to make things that people need”. ‘Need’ being the key word there, not want. There’s a big difference. Human needs have always been three very basic things; food, shelter, clothing. It was the latter that struck a chord in Kiichiro. You could say that Toyota’s future would quite literally be woven in fabric. How’s that for a yarn?

Fast-forward almost a Century, and Akio Toyoda seems to have been struck by the very same ancestral chord, right here in this day and age. Thus rather than just making cars, Toyoda-san has embarked on the brave new mission, and that is to provide “mobility solutions” for everyone; and when he says ‘everyone’ he really means it. Toyota will be looking at future generations moving forward (are you keeping track of all the puns word plays going on here?) the Toyota Motor Corporation won’t just be making cars for the general public, but also looking into sustainable mobility for those in their golden years, the less-fortunate and the disabled.

In that respect, TMC are working on mobility solutions that far exceed the confines of the 4-wheel, 4-box sedan, by literally looking outside the box, by again “making things that the people need”. Personal mobility solutions that include e-scooters for the elderly, wheelchair attachments for the disabled that negate the need to ‘physically’ push oneself along, and autonomous ‘people movers’ that self-drive passengers around town on a pre-set course.

How about zero-emission Fuel-Cell busses that can also double up as emergency vehicles in a crisis situation to provide electricity to a devastated area that’s had its power knocked out? Sounds far-fetched? It’s already a reality. During the recent typhoon Hagibis that struck Japan (a week before we arrived for TMS 2019!) TMC deployed their Fuel-Cell bus (below) to a town that was hit heavily by the aforementioned typhoon, and it single-handedly provided much-needed electricity to the area, which greatly helped the round-the-clock rescue operations. Not all heroes wear capes, not all heroes are human…

But that’s not where in ends in terms of this bus and other forms of public mobility, Toyota will be moving the future masses – both physically and spiritually - in ways never thought of before as well.

Nowhere is this more evident than in the field of robotics. Autonomous driving cars were science fiction a mere decade ago, and they’re (pretty much) already science fact today; and with that kind of autonomy in mind, Toyota are adamant about introducing ‘personal assistant’ humanoid robots in the very near future. These robots will be able to assist real people with the kind of daily tasks many of us take for granted. For example, I just walked to the fridge to get a drink, it was so easy. But how easy would it have been to do so, if I had no legs to walk on to get there, and no arms to open the fridge to grab that drink?

It’s an uncomfortable visual I admit, and I apologise, but it is something that many people have to live with on a daily basis. With the credo of ‘make things that people need’ in mind, Toyota are striving to make daily life better for us, and whole lot better for those who are unfortunate enough not to have all the faculties we do. Insofar as the aged are concerned, TMC has them covered with this mobility solutions movement too. There will come a time when the basic act of walking may be too much a task for the elderly, and while autonomous driving cars may be personal mobility solution to ferry the old and infirmed to and from wherever they need to go, TMC is also looking into the area of public transport for them. Semi-autonomous public transport vehicles are also being developed, that make it a lot easier for them to use.

It’s called the APM or Accessible People Mover, and is designed for “the LAST one mile for ALL people”. The general public, in fact the whole world,  will get to see these APM’s in action during the 2020 Tokyo Olympics, of which TMC is a big sponsor and supporter. These will be used to ferry Olympians from their general quarters to various locations during the track & field events. Automated Equipment Retrievers, basically the same as an APM but for objects, will also be deployed during those events, to retrieve items such as javelins, discus, shot-putts, hammers, etc. from the field, again, assisting the on-site organisers with their multitude of tasks.

Additionally, TMC are also very much part of the 2020 Paralympics, during which even more of their latest innovations in the realm of future “life enrichment” technologies will be deployed to assist the Paralympians with their daily routines of getting to and from the various competition venues. It will be a technological tour-de-force of what TMC have been developing in this field.

Back at the 2019 TMS, Akio Toyoda was all fired-up. He was ready. I’m quite sure he’d already heard the gossips and rumour mills about disgruntled journalists lamenting why there were no ‘real’ cars at the Toyota pavilion, and his opening speech at 1.30pm on the 23rd of October 2019, will go down in the history books as one of the most honest, most heart-warming and most animated speeches throughout the history of the Tokyo Motorshow.

Toyoda-san came out guns-blazing, he hit the stage like Tony Stark at a weapons convention, and he totally captivated the assembled audience with his wit, humour, honesty and eloquence. You could ‘feel’ his energy. You could taste his mission. You could tell, he wasn’t mucking about. His words were real. His words were amazing. In a nutshell, his message was simple; “Today you will not see any cars here at this pavilion, you will not see cars that you can buy today, tomorrow or even next year. Today we present the future of Toyota”.

“I am determined to transform Toyota from a car-making company into a mobility company. This means that Toyota will provide all kinds of services related to transportation to people around the world.” – Akio Toyoda, President, Toyota Motor Corp.

It almost seemed like Akio Toyoda was moving the Toyota Motor Corporation out of the car business, and in a sense, he was.

Toyota will not really stop making cars per se, that’s an exaggerated half-truth. While the car business will still very much part of TMC, one of the main focuses of future undertakings will very much be inspired by the past. Toyota began as a textile merchant, making things that people needed, and that’s exactly what they plan to keep doing. You may want a Supra or 86, I know I really want a Century, and Toyota will still have those for people to aspire to of course.

The Future of Toyota…moving forward.

But as the twilight years beckon, as the days begin to count down, as the vision blurs and reflexes slow, you’ll need the magic that the Toyota Motor Corporation is currently creating behind closed doors. Wants versus Needs, the age old conundrum that’s conflicted us since day one… well, not to worry, Toyota’s gotcha covered.