Just what is Porsche trying to accomplish with the all-new Taycan Cross Turismo? Everything, it seems.

Porsche’s journey in electric vehicle-making certainly got off to an electric start. Its first all-electric car, the Taycan, literally flew off the blocks with 20,000 units sold worldwide in its debut year. Considering the severe impact of Covid on the global economic, that’s a sensational number.

And they are not quite done yet, because joining the Taycan family is the Cross Turismo that is set to go on sale across global markets in the summer of 2021.

From the outside, it resembles a curious mix of the Taycan’s front with the Panamera’s rear. In fact, the design was already previewed at the 2018 Geneva Motor Show as the Mission E Cross Turismo.

It’s made to be significantly more versatile than the regular Taycan too, able to carry a maximum of 1,200 litres of cargo, albeit with rear seats folded down. Additionally, rear-seated passengers enjoy 47mm more headroom as well.

All-wheel drive and adaptive air suspension comes as standard on all four models. The optional Off-Road Design package increases ground clearance by up to 30 mm, allowing the car to be driven on mixed surfaces and uneven tracks. There’s even a dedicated “Gravel Mode” to toughen the car up for the terrain.

Falling roofline to the rear called flyline by Porsche designers.

Rear bicycle carrier developed specially for the Taycan Cross Turismo can be used universally for different types of bikes. An innovative feature is that the tailgate can be opened even with the carrier fully loaded.

Four derivatives of the Taycan Cross Turismo are available immediately from launch, all carrying the 93.4 kWh Performance Battery Plus package as standard.

The Taycan Cross Turismo shares its driveline architecture with the Taycan sedan, with all variants having two electric motors, one driving each axle. The electric motor, transmission and pulse‑controlled inverter are each combined into a compact drive module.

The two-speed transmission functions to simultaneously give the Taycan Cross Turismo better low-end acceleration and high-speed cruising, albeit at a slight sacrifice of energy efficiency at low speeds.

The possible recuperation power has been further increased, this time to 290 kW, significantly higher than competitors. What this means – when slowing down, the car relies primarily on the regen system rather than the disc brakes to scrub off speed, thus wasting as little kinetic energy as possible.

The Taycan Cross Turismo operates with a system voltage of 800 volts (voltage range 610 V to 835 V) instead of the 400 V that is usual for electric cars. This enables significantly faster recharging of the batteries - 5 to 80% charge possible in just 20 minutes!

Also, a higher system voltage allows greater energy to be carried on a smaller current, and thus thinner wires. This gave engineers the choice of either reducing the system weight without sacrificing power, or increase power without incurring weight penalties.

Through the standard Smartlift function, the customer can easily programme the system to automatically raise the car’s ride height at certain recurring locations such as tall speed bumps or parking ramps.

Another standard chassis function is the Gravel mode driving programme for journeys on light off-road terrain such as gravel tracks or muddy road surfaces. In this mode, the ride height is raised by 30 millimetres compared with the saloon. Along with it, all driveline electronics – chassis control, transmission shift mapping, and throttle response – recalibrate themselves to give the driver better control of the car over the challenging terrain.

Born to be Wild 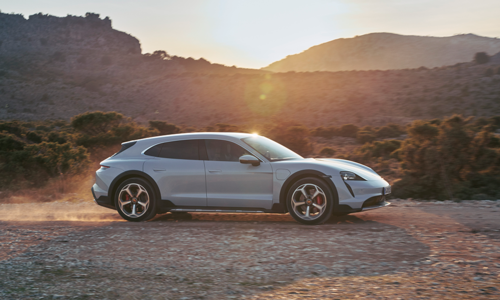 Porsche typically allow a high level of customization with their cars. For most customers, the process of picking through the options menu is an integral part of the buying experience.

With the Taycan Cross Turismo, the process can continue on long after the customer takes the car home. See a feature on the list you’re not sure you want? Hold it off, buy later if you’d like, and without needing to go back to the dealership.

Thanks to Functions on Demand, Taycan drivers can purchase various convenience and assist functions as required, even after taking delivery of the vehicle, and availability does not depend on the sports car’s original configuration.

The new features can be paid for and activated online without needing a dealership visit. This is currently possible for the Porsche Intelligent Range Manager (PIRM), Power Steering Plus, Active Lane Keeping and Porsche InnoDrive.

This could be the future of vehicle-speccing.

The newly built factory for the Taycan and Taycan Cross Turismo in the Zuffenhausen district of Stuttgart is pursuing a vision of a production facility with no environmental impact.

This commitment to sustainability is also clearly shown by the materials used in the interior of the electric sport car, some of which consist of recycled materials, and the establishment of a charging infrastructure that uses green electricity.