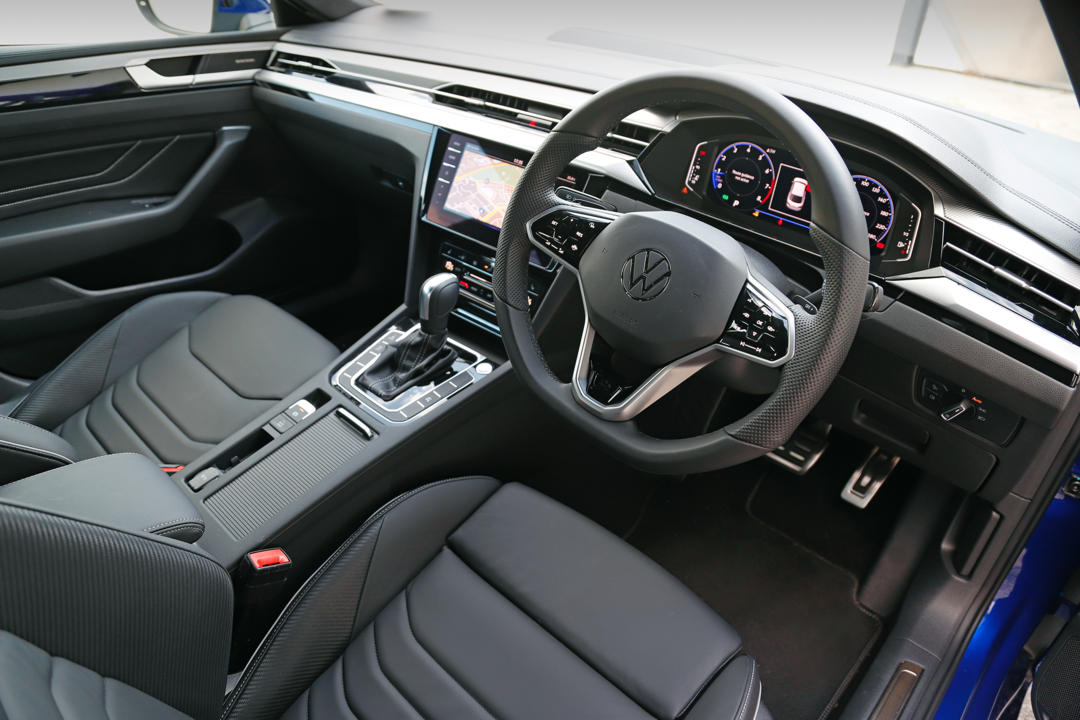 “On stretches of road that are horrible, this car just smoothens them out. Every single time I go behind the wheel of a Volkswagen, I’m always amazed at how they deal with the suspension; the ability to absorb, and the ability to go high speed over undulations, absorbing and resolving the additional compression without additional unnecessary movements. It’s just really good suspension.” - Bobby 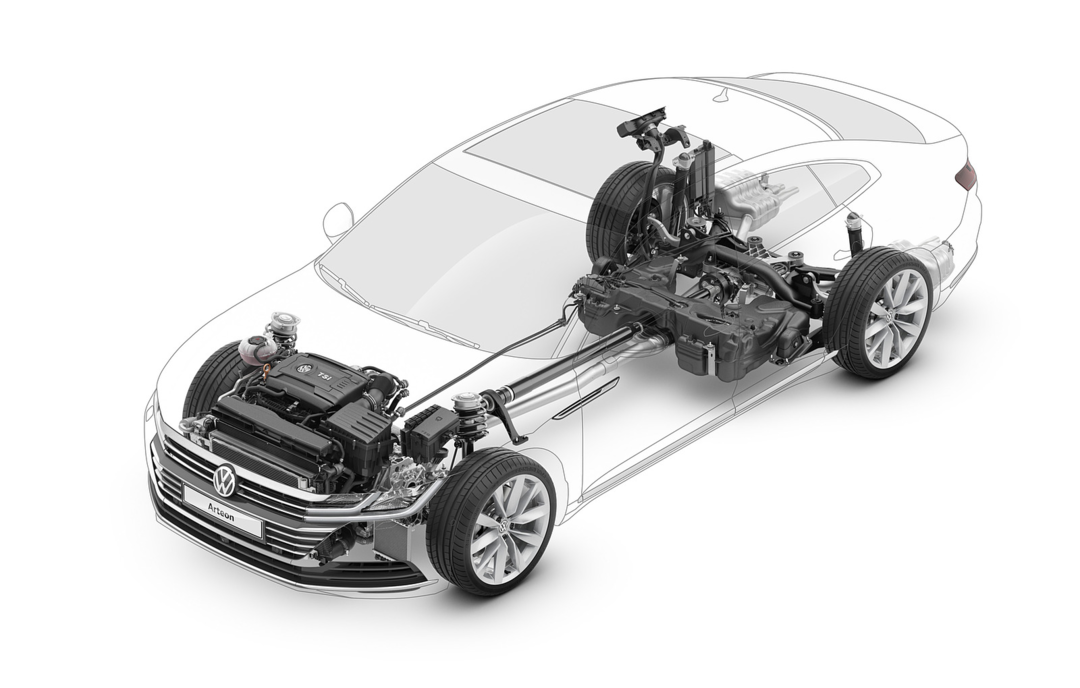 “It’s very easy to steer; as a city car, that really helps. Some people might think it would be very sensitive as a result, but it is not, and this is what Volkswagen does really well, the way they tune the car. At high speeds, it doesn’t feel darty, it actually feels progressive. It’s quite intuitive, yet it has a quick lock-to-lock ratio. The steering feel is actually better than a 3 Series!” - Thomas

“The Arteon here, is more like an engine that quietly goes about its business, and before you know it, pop, you’re on the wrong side of the national speed limit. It is fast, but does it in a non-fussed kind of fashion. It is still a competent car if you want to go anywhere quickly.” - Kon

“So, in just performance terms alone, the RM27,000 price increase of the Arteon facelift buys you two additional driven wheels, and an additional 90 horsepower.” - Kon

“It will easily turn more heads than a 3 Series or a C-Class.” - Kon 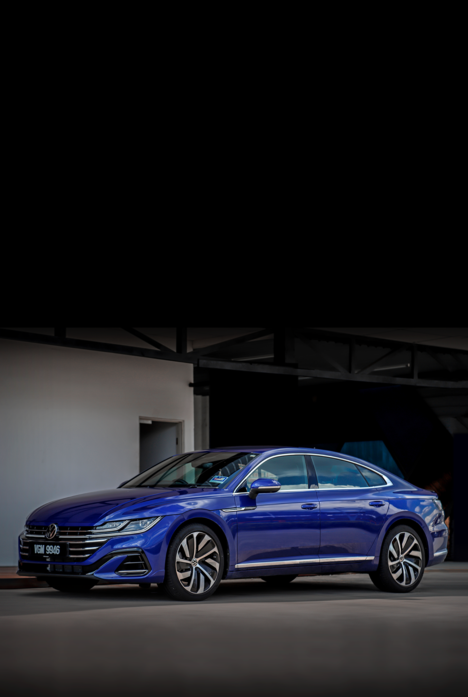 The three-box sedan had been stuck with the same predictable template for decades. Then the Mercedes-Benz CLS dressed up E-Class underpinnings in more curvaceous sheet metal and sold it as a more sophisticated preposition. Over at Wolfsburg, Volkswagen diligently took notes and transformed the Passat into the CC – same concept as the CLS, but much more accessible to the masses.

It helps that the Passat already sits on high quality running gear to start with, and that gave the CC a convincingly upmarket presentation, and a well-received one too. Despite its success, however, Volkswagen discontinued the CC after only one generation, its place taken up by the more extravagantly-named Arteon.

More style, more power, more driven wheels, for less money. Can the Volkswagen Arteon get you to rethink your choice between the C-Class and 3 Series?

The Arteon’s product concept follows the same basic formula that brought us the CC, which is to dress up the Passat’s already refined underpinnings in more alluring proportions. The execution now refined with the Audi A5 Sportback as opposed to the Mercedes CLS providing inspiration to its shape. Either way, this will still turn way more heads than the familiar premium compact execs.

Switching the Passat CC’s four-door coupe concept to the Arteon’s fastback execution was a masterstroke. Not only was the result still a sleeker car than a conventional three-box sedan, it has become a much more practical one too.

The rear hatch opens up to over 500 litres of luggage space, and because it’s a hatch and not an old-fashioned boot, you get a much bigger opening aperture. Not only that, the enhanced Easy Close system only starts closing the boot after it detects the key fob moving away from the car – so that you can take your time to lift out the heavy items after kicking under the bumper.

Having a sleek roofline did nothing to compromise the Arteon’s spaciousness. Seated at the back, Bobby’s 180cm frame still found three fingers of headroom, whilst Kon could just about fit a fist between his head and roof. Legroom is ample too, thanks to a wheelbase that is stretched 46mm longer from the Passat.

Speaking of which, Volkswagen’s designers have also put in an extra shift to give the Arteon’s interior greater differentiation from the Passat. Whilst the common architecture underneath remains evident along with impeccable build quality, the dashboard now gets a sportier-looking fascia.

And they’ve further improved it too. Less than a year from its local introduction, the Arteon receives a facelift adding more equipment, more power, and even extra driven wheels. For the same amount of money, no other car gives comparable performance. To get more performance from this segment requires going for either the complexity of a PHEV or spending much more on a big 3.0-litre six-pot like AMG C 43 or M340i.

Easy on the Eyes, Easier to Live With 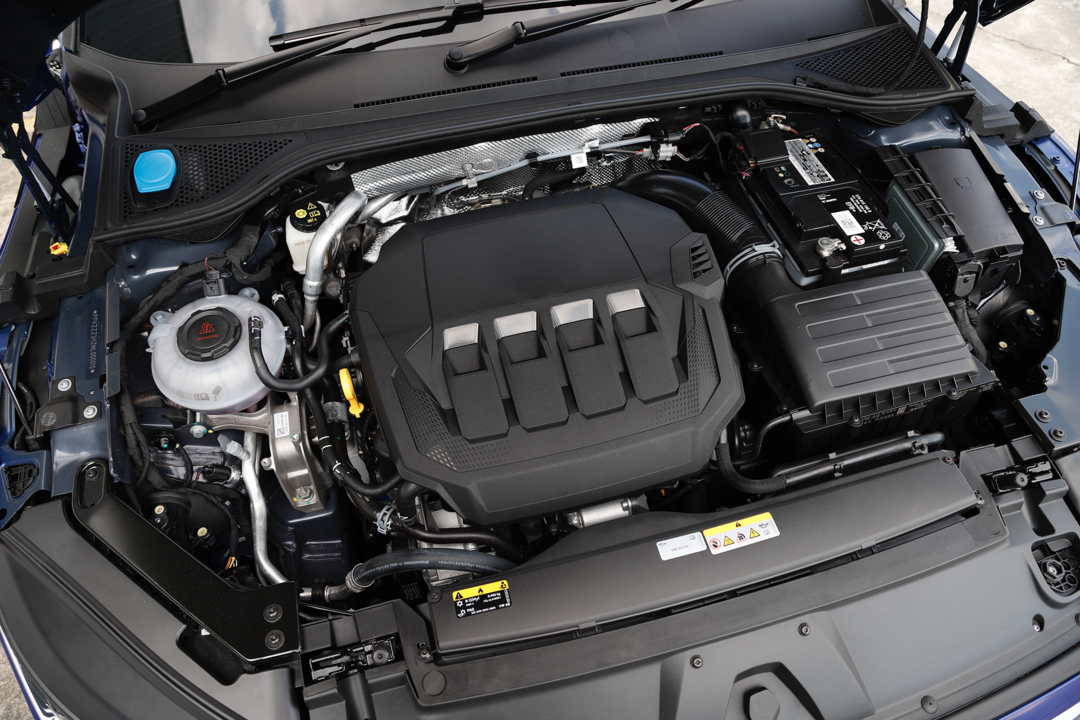 The Arteon is not a car without flaws, and it’s not what you’re thinking. Volkswagen’s troubled history of reliability is sufficiently distant in the past that we no longer feel compelled revisiting for the purposes of this review.

What the Arteon does have trouble answering against the competition is the lack of advanced driver assistance in its safety arsenal – you don’t even get auto braking. Considering the generosity of its spec in other areas – powered tailgate, 360-degree camera, Harmon Kardon audio – this is clearly not a cost-driven omission.

There is nothing else in the price range that is quite like the Arteon. This car is a showcase of Volkswagen’s vehicle engineering prowess at its very best – the tried and trusted MQB’s potential fully maximized to create a vehicle that is impressively competitive.

Yes, we know the Passat served as the starting point of its engineering, but that’s no detriment to the Arteon’s argument. What Volkswagen has produced here is a car of solid fundamentals, but dressed in impeccable style and packing a potent punch.

And Volkswagen clearly knows it has a winner in its ranks too. The decision to assemble a vehicle locally in Malaysia is one that car makers don’t take lightly. By committing to have the Arteon roll out from Pekan as opposed to shipping it whole from Germany, Volkswagen is demonstrating its confidence that they will sell enough of these things to make the investment worthwhile.

The official answer given to us is that Volkswagen is testing and finetuning the system for Malaysian roads, to which our reply is to test and finetune faster. Whilst we reckon the enthusiast convinced by the Arteon’s blend of style and performance will overlook this, well-informed Malaysians have become increasingly conscious on the subject of safety. Having a proper ADAS package in the Arteon will significantly broaden its appeal to the mainstream. 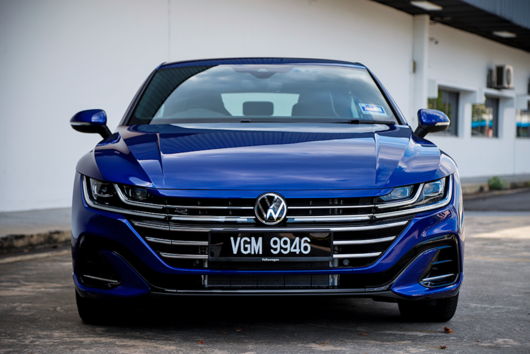 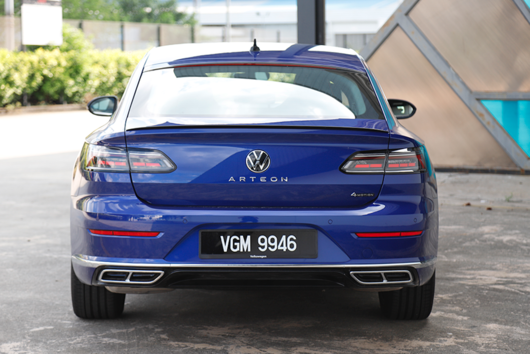 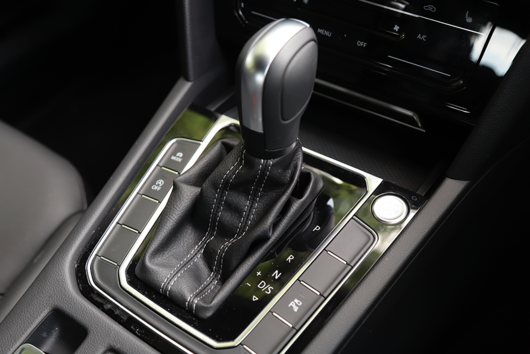 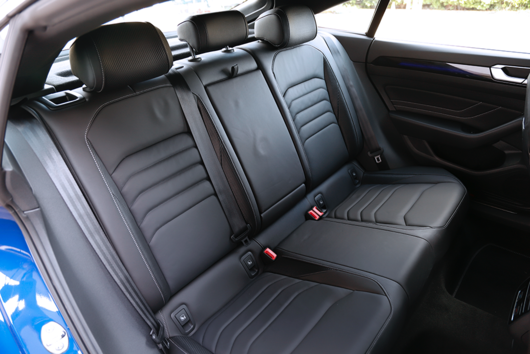 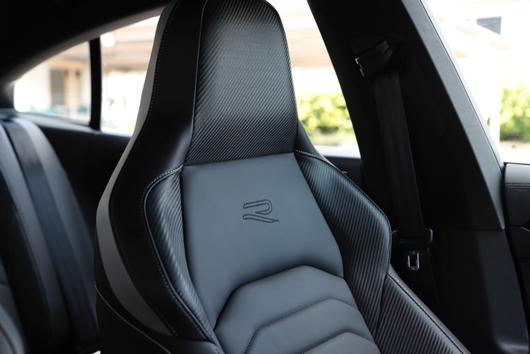 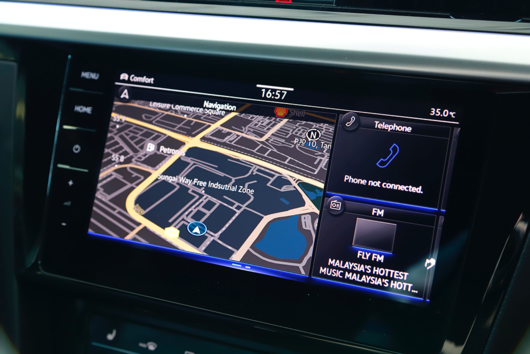 *Figures shown are for comparability purposes; only compare fuel consumption figures with other vehicles tested to the same technical procedures. These figures may not reflect real-life driving results, which will depend upon a number of factors including the accessories fitted, variations in weather, driving styles and vehicle load.